Still Plenty of Time to Turn Offseason Around

This Orioles offseason has been very frustrating for many fans.

In a winter where we thought the front office would greatly improve the team and put them in position to legitimately contend, they haven’t done much more than rearrange the 2022 seats.

I am behind the concept of not spending stupidly in free agency, but I am not behind the idea of standing idly by and not making solid improvements to help the team.

I don’t think that’s been done yet.

We have to remember that there is a lot of offseason left and many things that can still happen. I can tell you that if nothing gets done in the next few days, the likelihood is that not much happens until the new year.  A lot of teams shut down for the holidays and while you may see the occasional move here and there, most likely there will not be much going on.

In this article, I want to tackle some of the things that the team has done, some rumors that have floated around, and what might happen going forward.

This is a move I cannot figure out. I feel Mike Elias is a very smart guy and an excellent person to have at the head of the effort to get the Baltimore Orioles back to their former glory. However, moves like this make me question if he can make the necessary moves to put the team over the top.

Now, before getting into this move, I will add in the always necessary caveat that Elias is dealing with an ownership group that isn’t willing to really spend. John Angelos has already said, just a week or so ago, that the team needs to start making money before they start really spending it (even though they were just handed $30M by Disney). The concept of “you have to spend money to make money” doesn’t exist in his world.

That being said, this move makes no sense. Yes, Adam Frazier can still be a good defensive player at second base, and maybe he can be adequate in the outfield (I’m very skeptical of that) but offensively, there isn’t much to hang your hat on.  His StatCast numbers are poor, and while he has never been a big exit velocity guy, they still aren’t encouraging at all.

One thing that people have said is, look at how good he was in 2021. Well, he had an unsustainable BABIP in the first half of that season. After being traded, that dropped and so did his numbers. Now, I will say that he had a fairly good September that season but overall, his OPS is barely above .600 in his last 800 or so a bats.

Another disturbing trend is that his sprint speed is in the 37th percentile, so it’s not like he’s going to cover a lot of ground in the outfield.

More than any of that, my biggest issue with this signing is the process and decision making behind it. I am not even willing to say he can’t bounce back after a poor season and have value. It’s possible. There is nothing statistically that says he will, or that we should expect it, but mechanical changes (something he alluded to) and better luck, etc…could help him. Stranger things have happened. That said, you are a team loaded with middle infield prospects, many of whom who are ready now, and you are going to block those guys for a 31-year-old, declining player?

On top of that, the team has this obsession with adding left handed bats even though meaningful stats tell you that OPACY played tougher to lefties in 2022 than it did to righties (outside of homers).

Add to all of that the idea that a cheap team paid him $8M and you have a guy that is all but guaranteed 450+ at bats, unless he gets hurt.

So, to wrap this up…You signed a declining, poor hitting, slow player to a contract that pays him 10-12% of your payroll and you blocked some of the legit prospects you have to do it.

No matter his performance in 2023, this is a poor signing that has very little merit or logic behind it.

This is the deal I kind of like. Mychal Givens has some red flags, like his decrease in velocity, his FIP, and his walk rate, but he still gets a lot of strikeouts, misses bats, and his StatCast numbers are pretty good. 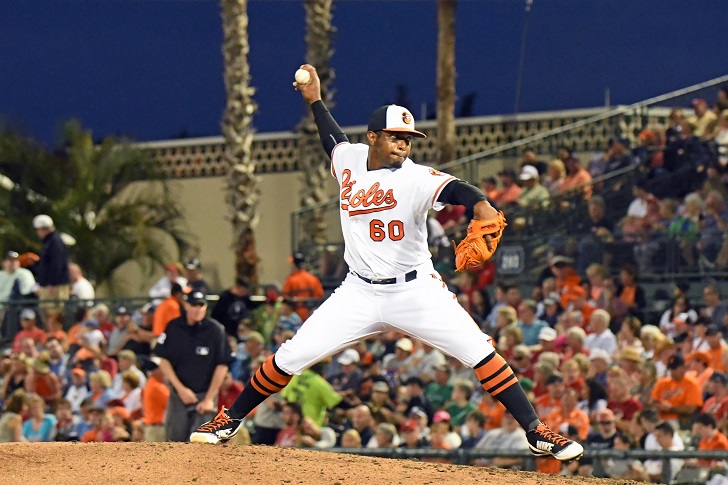 On top of that, I am skeptical of everyone in the back end of the O’s pen being as good in 2023 as they were in 2022, so he provides some insurance.

I personally am still hoping Tyler Wells is moved to the pen (and thus a real starter is brought in to take his spot). By doing that, Givens is more of a bridge reliever type guy. But if you give me a bullpen of Felix Bautista, Wells, Cionel Perez, Keegan Akin, Dillon Tate, Givens, Austin Voth and Bryan Baker, I think that will be pretty strong. There is some downside risk in there for sure (as most pens have) but I think overall, you have a lot of guys who will get strikeouts, miss bats, and avoid hard contact.

Givens is a solid depth move.

Topic #3: Cedric Mullins not being traded?

In a recent column on The Athletic, Dan Connolly explored the value of Cedric Mullins, with the backdrop being what Brandon Nimmo signed for to remain in NY.

While we were all watching what the Orioles would or wouldn’t do in free agency, Cedric Mullins’ value soared thanks to one lucrative deal in New York. My column: https://t.co/TC6Q7gzzDD

In this article, Connolly mentioned that Mullins just got married and that maybe he would be interested in an extension and that perhaps the Orioles should look into it. Nimmo signed his extension beginning what will be his age 30 season. If Mullins goes to free agency without a deal, he will be entering his age 31 season.

Signing him to an extension would make very little sense to me. First of all, does anyone really trust that his speed and thus his range in CF, will remain this good well into his 30s? Scientifically speaking the average person, including all-world athletes, start to see a decline in speed in their early to mid 20s. Now, that is the average and obviously there are exceptions, but how far past that exception are you willing to go here?

On top of that, Mullins is a guy who may be a platoon player, who has no arm to play a corner outfield spot, and is already OBP challenged.

Another thing mentioned in the Connolly article is that the team has reportedly not shopped Mullins this offseason. I can see a reasonable argument to keeping him this season and seeing how things play with some of the outfield prospects, including Colton Cowser and Jud Fabian.

However, I can’t see a reasonable discussion to extending him well into his 30s. You have him for three more years. No reason not to go year-to-year with him at this point.

In another recent column on The Athletic, Ken Rosenthal explored the idea of the Orioles trading Jorge Mateo. His suggestion is based on the ideas that Baltimore has several middle infield prospects, teams need a shortstop, and Mateo’s skill set could be valuable with the new shift rules in 2023.

If I am the Orioles, I am in full Trade Mateo mode. I think you have to question if his defense peaked in 2022 (he has never been close to that good before). I think you have to worry about his offense, especially his power as a pull hitter in OPACY, and I think you have the prospects that can come right up. Joey Ortiz is probably close to his equal defensively and has a higher offensive ceiling.

Now, with this said, I do question what value Mateo has. Maybe he fetches a good return, maybe he doesn’t. I am not trading him just to trade him, but I do think he should be shopped and if one of the several teams in need of a shortstop gives you the right deal, you move him.

Topic #5: What direction should the team go for another starting pitcher?

I believe the Orioles will add one more starter to the rotation and push the aforementioned Tyler Wells to the bullpen. There are still good starter candidates that make sense to me. Nathan Eovoldi is at the top of my list in terms of the free agents that are left. But if  I am the Orioles, I think I look at Carlos Carrasco. There is still a lot to like about his numbers and his expected performance. On top of that, he likely won’t cost much to acquire. We have talked about guys like Corbin Burnes, Brandon Woodruff, Pablo Lopez, etc., but those guys will come at a high cost and you can debate whether it’s worth it, especially if you can add a solid pitcher on a short-term deal for a small price.

Whatever they do, I think it’s imperative an upgrade at starter is added.  Kyle Gibson is far from a slam dunk to be an upgrade over Jordan Lyles, and while the hopes are high for Grayson Rodriguez, he is likely to take some of the normal early career lumps before settling in. Carrasco represents a guy who gives you a reasonable chance to have a sub-4 ERA guy who can give you 25+ starts.

As I said, there is a lot of offseason left and there is still time to shape this team into something that could be really good in 2023, but outside of the young guys really improving, they haven’t done anything to give us that hope as of yet.

Hopefully that is still to come.