Don’t look now, but something funny seems to have happened on the 2022 Baltimore Orioles’ road to 100 losses in their latest effort to be “bad for baseball”…they’ve become very fun. They just won their sixth game in May, on May 10. In 2021, they won five games in May…all of May. They’re 13-17, yeah, but they’ve also won seven of their last 10, and it’s been the most fun stretch of Birds baseball in a good long while.

On Tuesday night, O’s rookie Kyle Bradish toed the rubber against MLB royalty, the St. Louis Cardinals, 16-12 and as always near the top of the NL Central, with 33,000 red-clad fans in attendance in a stadium that’s hosted games in three different World Series since opening in 2006…

And he absolutely DEALT.

Making his third career start, Bradish posted his second “quality start,” while making such hitters as Nolan Arenado (2 K), Paul Goldschmidt (1 K), Yadier Molina and others look silly with his filthy slider and perfectly-placed upper-90’s heat. Bradish finished his evening with a line of 7.0 IP, 4 H, 2 ER, and 11 K, with both runs coming on a Harrison Bader inside-the-park home run thanks to a funky bounce off the centerfield wall on a ball just inches away from being hauled in by Cedric Mullins.

The 11 strikeouts by the rookie were notable not just in Orioles lore:

Our first rookie with at least 10 K's in a start since Wei-Yin Chen in 2012 🔥 pic.twitter.com/2XDyrhHWBe

But, since it was only his third career game, also in MLB lore:

Stephen Strasburg is the only other pitcher in MLB history to have a 11+ K/0 BB game in one of his first 3 career games! 😮 https://t.co/JiEM66oAWF

While Bradish gets nothing but credit for his amazing night, we need to point out that good pitching, surprisingly, has been nothing new for the 2022 Birds. As MASN’s Steve Melewski pointed out, Orioles starters have now allowed two runs or fewer 23 times in the team’s 30 games. As we mourn the loss of John Means to Tommy John surgery, others like hometown kid Bruce Zimmermann (2.67 ERA, 1.19 WHIP, 30 K/8 BB in 30 IP), journeyman Jordan Lyles (4.05 ERA, 33 IP), and promising young reliever-turned-opener/starter Tyler Wells (3.75 ERA, 1.13 WHIP, 17 K/4 BB in 24 IP) have picked up the slack admirably. And this is all without even mentioning that super prospect Grayson Rodriguez continues to beat down the door in AAA Norfolk.

(Yes, we need to acknowledge that the run environment has been depressed across all of MLB in 2022, thanks to a seemingly dead baseball. I’m not letting that bring me down. I’m pushing 40 and I’ve watched O’s pitching be terrible during live ball years, dead ball years, greased ball years, and screwball years.)

Speaking of Lopez, he wasn’t available on Tuesday due to being on the bereavement list. As a result, Dillon Tate (2.45 ERA in 14.2 IP) was called upon to close it out, but wasn’t his best self, allowing a solo home run, single, and hitting a batter before Brandon Hyde pulled him. Relieving him was a guy I haven’t mentioned yet, who has been perhaps the most impressive member of the ‘pen overall, big Felix Bautista.

Bautista had 16 K in 12.2 IP coming into Tuesday, and was tasked with facing Cards slugger Tyler O’Neill, who blasted 34 HR and posted a .912 OPS in 2021, with the tying run on base and two outs in the bottom of the ninth. This is a guy who was in Aberdeen at this time a year ago, and now he’s in Busch Stadium with the game on the line. Here’s how that went:

Bautista threw an 101 mph elevated FB and then came back with this….

Big Felix has been a mainstay on the popular Twitter account @PitchingNinja here in 2022, with his impressive gas (101-102 MPH at times) and diving splitter.

Meanwhile, the lineup has started to find its groove after a slow start.

One through six in the Birds’ lineup actually looks like a major-league competent group, which is why coming into the year we were steeling ourselves for a whole lot more 10-8 losses. While their early-season RISP woes were well-documented and certainly the culprit in several of those aforementioned 17 notches in the loss column, as you can see above, things have improved of late.

Our Birds have also started a new fun and silly tradition, the home run chain. 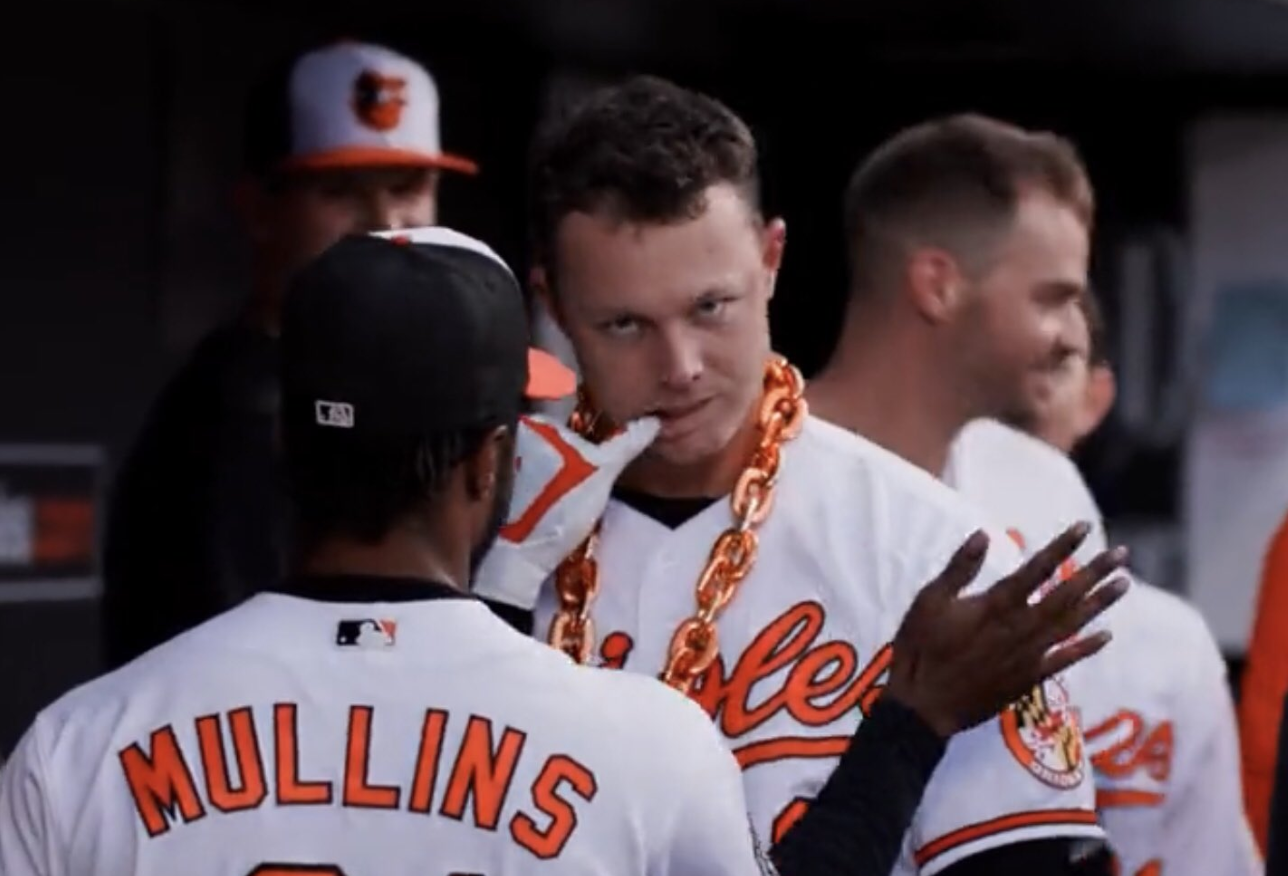 POV you're a Baltimore Oriole and you just homered pic.twitter.com/r4HRdI5LHK

What about fielding? Well, the boys have been flashing the leather as well. We’ve known for years what Mullins and Hays can do with the glove, and they’ve been doing plenty of it.

The infield has been getting it done as well though. The double plays are bringing back memories of the J.J. Hardy/Jonathan Schoop days, thanks to plays like this from Jorge Mateo.

The Birds have now turned 37 double plays this season, tops in the AL and tied for first in MLB.

Pitching, hitting, and fielding. Fun baseball with even more exciting and intriguing prospects on the way (Adley Rutschman says hi).

I’m not by any means saying that the rebuild is now an unquestioned success, and only good days are ahead for our beloved Birds. Of course there will be plenty more bumps this season. They will very likely be flirting with a 100-loss pace for the majority of this year. But if you can’t find something to smile about while you enjoy some baseball this season, Birdland, I don’t know what to tell you.

This is fun. Let’s enjoy it.

It was an action-packed news cycle to start the last week of April for the Orioles’ minor league affiliates. We discovered early this week that …