Login
Menu
HomeNews and AnalysisWelington Castillo Catching On or Catching Up?

Welington Castillo Catching On or Catching Up?

Orioles fans, and to some extent, the media members who cover them, are up in arms over new catcher Welington Castillo’s decision to play for his native Dominican Republic’s team in this month’s World Baseball Classic. He’ll leave camp this weekend to report to his country’s squad.

The international tournament blows a huge crater into his first spring training session with the Orioles – his first real opportunity to become acclimated with a new-to-him pitching staff, fellow catchers on the team, coaches and especially manager Buck Showalter.

Minus the appearance of just six games with Seattle in 2015 — when he was traded to the Mariners and away from them in separate transactions 15 days apart — Castillo has been a National League lifer, splitting his previous seven seasons between the Cubs and Diamondbacks.

To complicate matters, this is also pitching coach Roger McDowell’s first season with the Orioles, turning the page on an 11-season stint as pitching coach with the Atlanta Braves. An opportunity to work with the team’s projected No. 1 catcher more often before Opening Day on April 3 would be a welcome one.

But how big of a deal is it, really?

Jack McDowell (no relation to the current pitching coach), who won the 1993 American League Cy Young Award with the White Sox, said in a Facebook message that he believes Castillo will be fine, and other catchers have had to adjust to new teams with shorter notice.

“What if he got traded to the team in May?” the three-time All-Star and two-time 20-game winner asked. “These are big league guys, the adjustments are quick.”

Former catcher Gregg Zaun, who played 16 seasons in the Major Leagues — including three seasons in two stops with the Orioles — will get a look at Castillo on April 3 when Baltimore hosts Toronto in both teams’ season opener. Zaun is a studio host — much like his uncle Rick Dempsey is for the Orioles’ MASN — for the Toronto Blue Jays, a team he played five seasons for.

In all, Zaun played for nine franchises, so he knows a little something about being a catcher who’s been asked to learn new staffs on the fly.

“I would want to spend as much time with the guys as I could prior to the beginning of a season when joining a new team,” Zaun said in an e-mail. “That being said, I played in an era that was prior to the enormous amount of scouting and information that’s out there now. I relied on my eyes and my experience to guide me through calling a game. I forged relationships during spring training that served me well in the heat of the battle.”

But he admits that today’s game is one of a different attitude than from his era, for better or for worse.

“Things have changed in the game a little — you have rookie pitchers shaking off veteran catchers left and right in their Major League debuts,” he said. “Long gone are the days of following your catcher blindly through a ball game, and rightfully so. Many of them are terrible game callers and oblivious to reading bats.”

Zaun, however, said he thinks the Orioles and Castillio should to be able to work through his limited availability in spring training.

“It would’ve been a nice gesture for Castillo to forgo the WBC in lieu of joining a new team, but I think he will have plenty of time to get to know his teammates. As far as game-calling and knowing the strengths and weaknesses of his pitching staff go … that’s common knowledge.

“Pitchers are creatures of habit. When their backs are against the wall, they are going to do what they’ve always done. Chances are if Welington Castillo cares one iota about calling a good game, he already knows what his guys are going to do. He would have seen that from afar as a student of the game while casually watching baseball games.”

As far as the World Baseball Classic goes, Zaun belongs to the camp that thinks the international tournament might be more trouble than it’s worth. Participating players — and Orioles’ front-line players Adam Jones, Manny Machado, Jonathan Schoop and Mychal Givens are also playing in the WBC — risk injuries that could keep them from being available to their respective Major League Baseball teams who are paying them millions of dollars.

“If people are making a big deal out of his participation in the WBC, they should probably take a look at the participation of other players as well,” he said. “The WBC, while a good idea in theory, is an unneeded distraction for players and certainly a risky and dangerous situation for all who participate. They are not in good enough shape to be playing highly competitive baseball at this point in the calendar. Most players are barely ready for it Opening Day.

“Major League Baseball should rethink the WBC right after they rethink how they decide home field advantage in the World Series.” 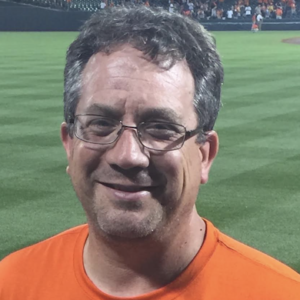 Kevin George was a sports writer for daily newspaper in Easton, Md., The Star Democrat. Besides local high school action, he also made the occasional trek across the bridge to cover Orioles, Ravens and Terrapins games. He wrote for 12 years at The Star Democrat, and was on the sports staff for three years (including one as sports editor) for The Daily Athenaueum, the student newspaper of West Virginia University. He still religiously watches sports on TV and sits on the Easton Little League Board. He lives in Easton, Md., with his wife Kristine, and their sons, Noah and Nathan.