The MLB Trade Deadline is quickly approaching. This usually means doom and gloom in the past four years as the Orioles were one of the worst teams in baseball. However, the Orioles, as of July 28th, find themselves in unfamiliar territory. They aren’t in the basement and are in fourth place in the AL East. That might not be anything to write home about from an outside perspective, but this is a huge win for the Orioles, and this team is showing much more life than any team in the Mike Elias era.

That said, it doesn’t stop Elias from selling; it helps him. In years past, Elias had to put lipstick on a pig when dealing his players for prospects. The players weren’t good, and Elias had to talk up a couple of weeks of success from players like Tanner Scott and Paul Fry. This hurt him last year, but it should help him because of how good the team is and how well the team is performing.

So let’s see who is on the market and who isn’t and who gets traded and who doesn’t.

Out of the 26 players on the 26-Man Roster, I think about seventeen players are un-tradeable. This is either because they are pillars of this franchise for the next decade (Adley Rutschman and Ryan Mountcastle), are great relievers who have a ton of control (Felix Bautista and Bryan Baker/Cionel Perez), are young starters who are controllable (Dean Kremer), or are below average starters who are veteran presences in the locker room (Rougned Odor and Robinson Chirinos or Spenser Watkins). 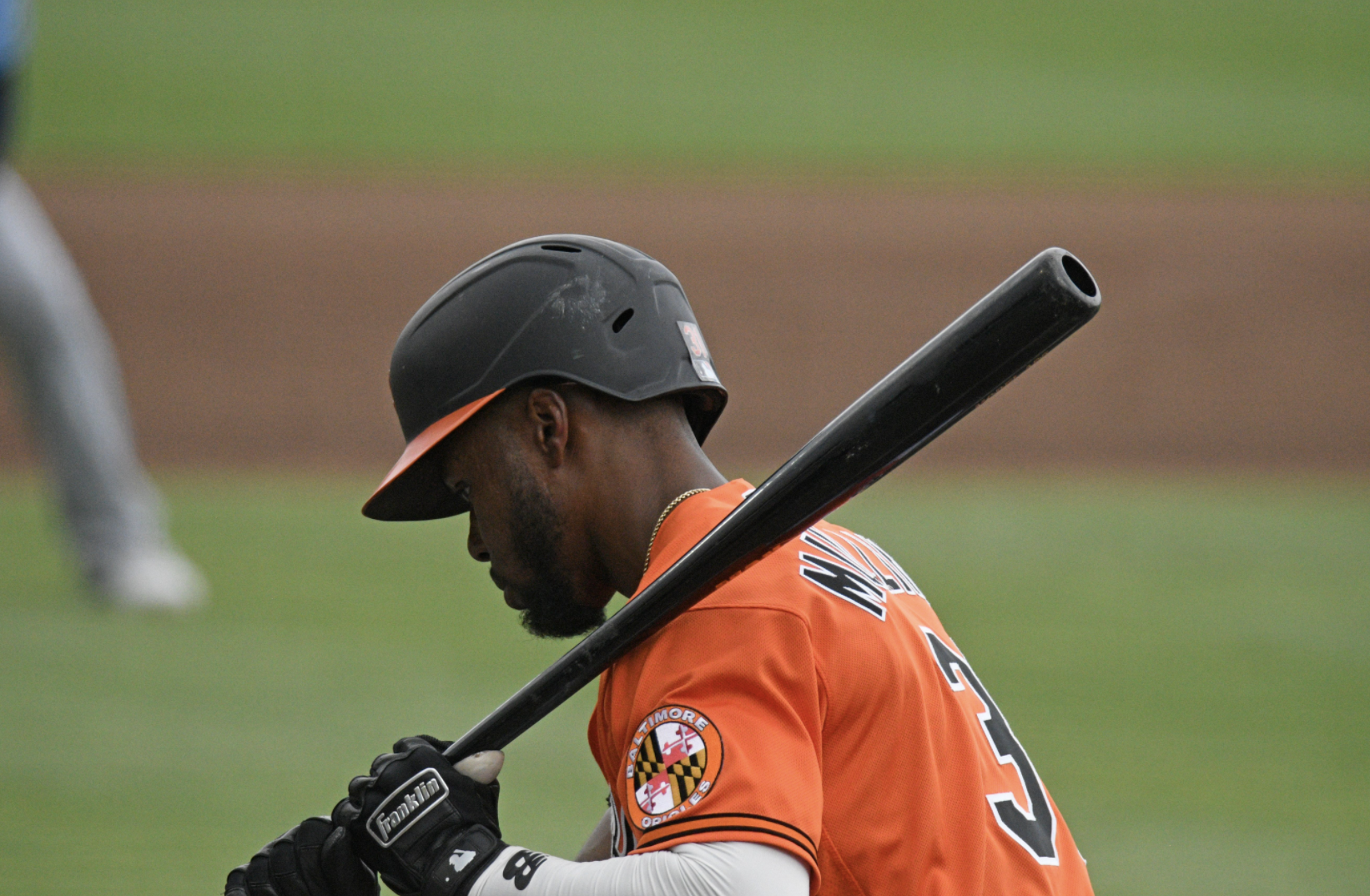 Probably Staying unless a Deal blows The Orioles Away

This category is hard to predict, but I expect these guys to stay unless Elias is blown away by a deal. Cedric Mullins is the first player in this category. He’s had a bit of a down year offensively. I don’t think anyone expected him to keep up the nearly 6 WAR pace he was going with last season. Mullins still ranks very high on the WAR list with the Orioles, but his wRC + is barely above league average at 104. He is still creating all that WAR because his base running and defense are on display every night. So the question is, why is he in this category then? The answer is that he still has value, and I feel like a team could get desperate enough to trade for Mullins if they think the 2021 version is still in there and the 2022 version is his floor. I don’t think it will happen, so Mullins finds himself here, but if a deal came around, I do think the Orioles trade him.

The next player is Jordan Lyles. He’s had a rough stretch, but he’s an effective innings eater for the Orioles. Lyles gives value as a guy who will keep you in games despite not having good metrics. If a team is desperate for a starter, I think the Orioles move him.

The next group is two relievers, Keegan Akin and Joey Krehbiel. Akin has been a weapon for Brandon Hyde out of the bullpen, providing a ton of versatility. He can be a guy who can give multiple innings or come in high leverage situations and perform.  Krehbiel is the sort of the same, but he comes in more high-leverage situations. These guys have multiple years of control, so getting them will take a lot. These guys aren’t in the staying section because relievers like Akin and Krehbiel have value. After all, they are true weapons while the others have distinguished roles.

Likely On the Move

Alright, here is my take on this Deadline that you probably want to see: I think there are four players that the Orioles are actively shopping.

Let’s get this out of the way: Trey Mancini will probably get traded, breaking the fanbase’s heart. It stinks, but he doesn’t have a place on this team in the future and doesn’t bring much value on the field as a 1B/DH type. Trey does have a 133 wRC+ this year, which is great, but he was going through a horrible slump before Wednesday night’s game, and then Thursday’s amazing little league home run. Trey is a good hitter, but his limitations seriously hurt his potential for a trade. So why is he in this section? I believe the Orioles will package Trey with one of the relievers to get a better deal.

The options for that are Dillon Tate and Jorge Lopez, the Orioles all-star closer. Tate was already rumored to be in a trade with Trey to the Mets early in the week, showings that Elias is shopping Tate. Tate has remade himself this year, developing a nasty sinker with disgusting movement, leading to a breakout season. Tate is also controllable for a while, so packaging him with Trey to get a better return is smart. Jorge Lopez has had a great season despite some blown saves. The issue with Lopez is his age, 29, and he has two more years of arbitration before becoming a free agent in 2025. That seems like a long time but compared to some of the other younger relievers, it isn’t much.

The main issue for me trading these two is this: how much does the lack of success outside of this year affect the value? I can’t answer that question because I could see a team buying the upside of these relievers and looking at this season as their floor while their ceilings are much higher. I could also see a team worrying about trading for them because they aren’t proven communities and haven’t pitched in big games. Lopez has blown some saves this year, and if you take him out of Baltimore and put him with a big market team to close games, how will he do? Tate is talented and might have unlocked something, but he could fizzle out. Relievers are volatile and sometimes have meltdowns that ruin their careers. Lopez and Tate are on the market, though, and Elias should sell high on them now and not wait.

The other player here is Anthony Santander. Santander is having an interesting season. He is still hitting for the same power he always had, but now he is more patient. What is cool about Santander is that he hasn’t lost any of his power as he has the same slugging he had last year but with improved on-base ability. Despite having good offensive numbers, he only has 1.5 WAR this year. His issue is that he is a horrible defender in right and in left and doesn’t bring any value as a runner. He probably fits better as a DH, which lowers his value, although at least this year he is attractive to NL teams as well. Santander is a good hitter and isn’t a free agent until 2025, but his lousy defense lowers his value. The Orioles sort of have to trade Santander because they have a logjam of outfield prospects. Hays is slumping right now, and Mullins probably won’t get moved unless a deal blows Elias away. Santander is the obvious trade candidate because of how Kyle Stowers fits right in as his replacement.

I think the Orioles trade at least three players. Trey Mancini and Anthony Santander are the obvious choices because Trey is a free agent at the end of the year, and Santander needs to be moved because of the talent logjam. Along with this, I do think one of Tate and Lopez go. While these relievers are the rocks of the Bullpen right now, these guys could fizzle out in a year, and the Orioles have shown they can develop relievers, so losing Tate or Lopez won’t be as bad as it seems. If you are mad about potentially trading these two relievers, remember last year when the Orioles held on to Paul Fry and Tanner Scott instead of trading them? That backfired in their faces badly. That shows that you should sell on relievers high and understand that these relievers flame out faster than any other position.

So there you have it: Trey Mancini gets traded, and Anthony Santander gets moved along with one of or both Jorge Lopez and Dillon Tate.

Come back next time when I go over the Trade Deadline next week and see how right – or wrong – I was.

Give That Fan a Podcast

The Return of Give That Fan a Podcast!

When Eutaw Street Report senior editor Derek Arnold approached me in September 2020 about hosting a podcast on ESR, I jumped at the chance. I …